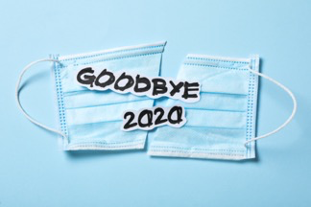 This has been quite a year, and one many of us are eager to see in the rearview mirror. Apart from individual struggles and losses, this has been one of, if not the worst, collective year I can remember, based on what I’ve seen and heard from others. I say that based on the disruptions and challenges that affected us all, though each of us has had a unique and personal interface with the events of 2020. This isn’t to say that all of 2020 was bad. There have been things to celebrate; joy sprinkled in the midst of trial.

The most troubling part of 2020 has clearly been the pandemic. Its disruptions have been monumental, and certainly unlike anything seen in our memorable lifetime. Every aspect of life was affected by the pandemic from the nuclear family level all the way to how we interact with other nations. Even death and taxes have been affected by the pandemic! No one has escaped its reaches, and some families have faced the worst of it head on through illness and death.  The resulting economic crisis also touched tens of millions of lives in ways they won’t soon forget or recover from.

This year’s political battle over the election was a pandemic of its own. The disease of partisanship infected everything, not unlike the COVID pandemic, although it infected that as well. None of us have seen this level of division in the nation in our lifetimes. Even the struggles of the 1960’s did not divide us as wholly as this cycle has, according to pollsters. Facts and truth are no longer given, and we have run out of institutions to trust. We are each seemingly left to our own inner compass and feelings about what is right, wrong, true, untrue - nothing seems to be able to challenge this development.

Racial tensions ran high through most of the year after a series of events that brought attention to the disparities that still exist for minority communities. We saw the rise of cancel culture, as it encapsulated a movement that easily went too far in some instances, creating a backlash instead of progress. Sound bites like “defund the police” tarnished what could have been helpful dialogues about police and criminal reform. Rioting, while a part of only a fraction of the peaceful protests this year, allowed many to write off the energy and impetus for reform and healing. Our own community made national news after Ahmaud Arbery was shot and killed, although we were able to come together as a diverse community for justice in a way that did not result in violence like that seen elsewhere. 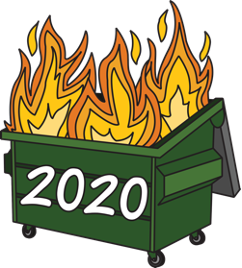 There were other elements of this year that were troubling, like a record hurricane season and rampant wildfires here and in Australia. There were troubling international incidents like the drone attack on a high-ranking Iranian official that scared us all for a bit. Does anyone remember the Saharan dust storm that reached us here with hazy days of poor air quality? Some also found the renunciation of Prince Harry’s royal status to be very distressing. We could go on, evaluating headlines and find more to complain about, but that’s probably sufficient. I think we get the point.

I also want to name that one aspect that has fueled the negativity and challenge of 2020 is our use of media in all forms. It is not fair or effective simply to blame the media; they provide services and products, and as long as we use them, they will do whatever it takes to remain profitable and grow even bigger and stronger. We ultimately determine what we get through our small choices and behaviors.  We, as a nation, have fed the worst instinct of media companies. Our need for narrowly reported news in a way that feeds our preconceived notions is why partisan-aligned media is thriving right now. We have become a series of target audiences, seeking outlets that help us confirm our biases. We can’t stand the discomfort of a report that challenges our notions, so we change the channel, or scroll on another blog, or read another opinion writer until we’re comfortable again. We have created a media mindset that doesn’t always seek to inform so much as to entertain and to satisfy. If we keep consuming media in this way, it will only get worse.

Social media is particularly dangerous. I say that as an active user of social media. For all its benefits, the ability to spread conspiracy theories and truly fake news (also known as lies) quickly is breathtaking. It has amplified and normalized the fringes. That reality has been the primary feeder for many of the problems listed above. There has always been an element of danger in each new form of technology for abuse, and with each innovation it magnifies a bit.  We’ve come a long way since the advent of the pamphlet, the radio broadcast, and then television.  I don’t know where we go from here, but it is up to each of us to be wise and conscious users and consumers. Our hopes for success in 2021 depend, in large part, on how we will use media, and resist being used by it.

Well goodness, Fr. Tom, what a depressing Rector’s Rambling to end the year! Maybe.  But I’m not done yet. The truth is that I’ve spoken with countless people about how they have faced challenges this year. For all the trials, we have grown stronger in some ways, while we’re still fragile in others.  In order to heal and move forward, we must be able to name the source of our grief and then grieve it. It won’t work to just sweep it under the rug. We know this from other grief work. It’s important to admit where we’ve been hurt and how we’ve been hurt so we can work with the pain and the loss. We need to be able to process it and then, having acknowledged it, move on as we are able, entrusting our pain to God for final healing. To do this with a calendar year isn’t totally effective; many of the challenges of 2020 are carrying over into 2021, although in most cases, we can see light on the horizon, with a sense that things will improve.

We must also name places where goodness flowed through 2020 and its events. I can name, for example, my firsthand experience of how formerly disparate elements of this community have come together since the Arbery shooting. That growth is going to bear fruit for years. I’ve also seen an ability to learn new tasks and utilize creativity in the face of this pandemic. Nine months ago, I had a passing ability to do basic work with music and video editing. Now it’s second nature and I’m a lot faster and a lot more capable – a necessary skillset as this pandemic continues, even if it’s not one I imagined in seminary. Similarly, I have seen the same kind of growth in my staff and in others whose lives intersect with mine. So many people have come up with ways to meet challenges head on that it has renewed a sense of common good and shared effort. Again, there is much fruit yet to harvest in these respects.

There is even more hope. We can relearn how to hear the other and respond instead of reacting.  We can relearn graciousness in hearing opposing ideas and realizing that every matter is not one to determine the success or downfall of our civilization. We can relearn to trust some of our institutions, that generally tell the truth and seek the improvement of our society and people. We can relearn humility, that allows us to push down indignation when we encounter ideas that challenge us. Some of this learning takes a lifetime. Some of it takes the entire span of human existence, and still isn’t complete. As I’ve been reminded through the post-eucharistic blessing I’ve used this fall, we don’t have to complete this work, but we aren’t free to abandon it, either.

Finally, I take heart in remembering that there have been other bad years in our history. Not just bad events, but eras where the news was seemingly negative for a prolonged period.  We’ve come through them all, and we’ll come through this one. We have God as our guide, if we’ll let God guide us. We know the way to the place we want to get to, in this life and the next, and it is found in Jesus Christ. His Way is the one of love, forgiveness, inclusion, and life.

We’re imperfect beings in an imperfect world, seeking the perfect love of our perfect God.  We’ve got it, if we’ll just accept it and let it take root in our hearts.

2020 hasn’t been all bad, but it has been challenging in the aggregate. But if it accomplishes nothing else, it has shown us where we need to grow, highlighting our weaknesses and our brokenness. It’s not the kind of testing we enjoy or relish, yet it will help us and the generations to follow, if we will let it. Times of trial have typically been times of growth, too, and these days will be no different.  We’re in this together, we’ll keep the faith together, and we’ll get through it together. With God’s help and our efforts, 2021 will be better.

Most gracious and merciful God, you have reconciled us to yourself through Jesus Christ your son, and called us to new life in him. Grant that we, who begin this new year in his Name, may complete it to his honor and glory; who lives and reigns, now and for ever. Amen.